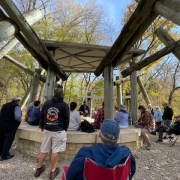 A few years ago, when St. Paul UCC member Tracy Kugler was serving on her church’s Earthwise – Creation Justice team, she started thinking about the connections between creation justice and social generally, and specifically about the need for a land acknowledgment.

“I just had a sense that it’s all connected,” she says. “And I wanted to make sure that the way we put this together wasn’t just about putting some words on paper and checking a box or reciting something once in a while before worship.”

Kugler joined with three church members—Jennifer Atterberry, Mimi Goodwin, and David Weiss—and lead minister Rev. Sarah Brouwer to form a task force to give the issue the attention that it needed. The group spent the first summer doing its own research, learning about the history of the Dakota in Minnesota and taking workshops on how to do land acknowledgment work.

In fall 2021, the task force introduced the work to the congregation, sharing information about why this issue was spiritually important through communications and an adult faith formation session. In winter and spring of 2022, the church offered a Lenten series with speakers on the topics of Indian boarding schools and the doctrine of discovery, as well as a panel of Native speakers on the contemporary relationships with the land. The church also offered field trips to connect with Native organizations.

“We got good attendance, and the sessions were really formative for the work we were doing,” says Kugler.

Rev. Brouwer says the work has been a testament to the church’s evolution. “We are moving from being a task-oriented congregation to one that thinks deeply about its own white privilege and self-transformation before we do outreach and service,” Brouwer says. “This is deeply spiritual work.” Kugler adds, “This is about us thinking more systemically instead of just treating symptoms. We can still help with urgent needs, but we need to think more about systemic change.”

As the task force approached writing its land acknowledgment, they looked at other examples and worked with the congregation to determine what resonated. “We came to a place that is pretty powerful,” says Kugler. The statement was adopted at a congregational meeting, but Kugler and Brouwer are quick to say that this is just the beginning of the work. “The adoption of the statement was a milestone for sure,” says Kugler. “But now we are putting together a plan for how we want to carry forward this work, how we will continue to develop relationships with Dakota people and really live into what we said we are going to do.”

For Brouwer, who came to St. Paul’s in 20XX, this work has been an exciting part of the revitalization of the congregation. “St. Paul’s congregation was diminishing a few years ago but people have now been to the edge and have come back and become more bold, more extravagant in our welcome and justice,” she says. “It’s been a really beautiful thing to witness.”

The church developed a brief version and a full land acknowledgement:

Brief version for weekly use
St. Paul’s UCC acknowledges and honors the Dakota people upon whose homelands we gather for worship today. We give thanks for their presence here since time immemorial and acknowledge the many harms done in the wake of European colonization and unjust United States government policy. We commit to working with the Dakota and all our Indigenous siblings to heal from those harms and care for each other and the land. We invite you to read our full land acknowledgment on the wall in the Narthex.

Full Land Acknowledgement
We acknowledge that St. Paul’s United Church of Christ is located on the homelands of the Dakota people, who have lived here since time immemorial and continue to make their lives here. The land of Minnesota is also home to Anishinaabe, Ho-Chunk, and other Indigenous peoples.

The United States government stole this land from the Dakota people through unjust treaties and dishonest dealing. White people strove to separate the Dakota from the land to which they belonged and from the culture that rooted them in sacred relationship with the land and one another. The Christian church empowered this genocide through the Doctrine of Discovery and facilitated cultural erasure and abuse through Indian boarding schools. The capitalist economy still treats the land as a commodity, leading to continued harm. We recognize that these policies and practices are morally wrong. We seek to reject the imperialism and supremacy at their roots.

Native Americans the congregation learned from through presentations and “field trips”: