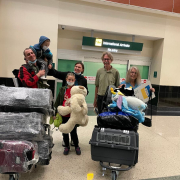 Jan and Kim Shaffer, members of First Congregational UCC Mankato, have opened their home to a child from Northern Ireland, a foreign exchange student, a Rotary student, and several Rotary chaperones. So, when they read about a program to support Ukrainians impacted by the current war with Russia, it didn’t take long for the Blue Earth couple to decide to sponsor and house a family.

In September, they welcomed Alex Rykov and Julia Rykova, children Luka and Alesia, and dog Noah into their home, where they converted their basement into an apartment. The two families cook together and share meals.

“I’m a firm believer that you can travel by having people come to your house,” Jan says. “So when Congress passed special immigration for Ukrainians and we saw a story about a group named Uniting for Ukraine, I looked at Kim and said ‘Do you want to do this?’ And we both said ‘Yes!’”

The process moved quickly, with five families contacting the Shaffer’s for possible sponsorship. “Julia and Alex seemed the most prepared,” she says. “We sent them pictures of our home, the school, the downtown in Blue Earth and our church in Mankato.” The Shaffers also attended webinars to understand their commitment and how to best support the family.

Jan says that a church member paid for the family’s airplane travel, and the congregation as a whole has been deeply supportive. The Shaffers have been devoted members First Congregational for eight years, driving 42 miles each way on Sundays to attend church.

“Our church and the Blue Earth community have been so welcoming,” Jan says. “The school has bent over backwards.” The plan is for the family to live with the Shaffers as long as they want and need. Jan says her church community is ready to help Alex and Julia find jobs as well.

For now, the Shaffers are helping the family acclimate to their new environment. They are sharing customs and cultures, new foods and new adventures. “We have learned what borscht is really supposed to be,” she says. “And Kim made plans to take Alex to a Gophers football game, which is exciting and new for him. We are receiving far more than we are giving. The joy of having them here is enriching our lives incredibly.”

Read a recent story in the Faribault register about the Rykov-Rykova family, and learn more about Uniting for Ukraine.