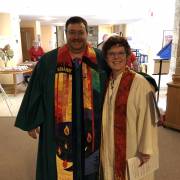 A few years ago, as the Robbinsdale UCC and Parkway UCC congregations began contemplating a consolidation, the Rev. T. Michael Rock, then senior pastor at Robbinsdale, got sage coaching advice from a peer. “Don’t be in charge of it,” T. Michael says he was told. “A successful consolidation is led by the smaller congregation.”

He heeded that advice, stepping back to let Parkway lead the conversation. “We looked at all of our options,” says the Rev. Kathy Itzin, who had served as Parkway’s lead minister. “Merging with a non-UCC church, moving to a storefront, but in the end we chose a consolidation with Robbinsdale.”

Today, Kathy and T. Michael are co-pastors of what they call a “new church.” They are quick to point out that this was not a merger; rather, it was about forming a whole new entity. In fact, both interviewed as if the new church were calling new pastors.

T. Michael says that the focus brought to the process aided decision making. “Our congregations had worshipped together and our councils had met, so we posed a singular question: Do we want to consolidate? It wasn’t scenario planning. It was beautiful the way it happened because we kept the iron hot on that question. And then we asked ourselves, if we say yes to that question, how do we do it well?”

Once the question was answered, Parkway sold its building, which was just two miles from the Robbinsdale location, and decided to use a portion of the sale to subsidize co-pastor salaries for four years. “After that timeframe, we agreed that neither of us would quit and that both would reduce our salaries if we couldn’t afford both of us,” says T. Michael.

Robbinsdale Parkway UCC is now two and one-half years into its new life. During the first year, the two ministers shared the pulpit, giving “half sermons.” Kathy says, “We wanted to avoid the T. Michael Sunday or the Kathy Sunday.”

They both believe deeply in the co-pastor model. “I love the collaboration with an equal colleague,” says T. Michael. “We are a good team. I have ideas and Kathy knows how to make them better.” The two also asked five feminist leaders to give them perspectives and to do check-ins to make sure they truly function as co-pastors. “We bring different things to this ministry,” says Kathy. “We have different skill sets that complement each other. And honestly, we just truly enjoy each other.” They frequently play music together, Itzin on string bass and Rock on guitar.

For congregations considering a consolidation, they recommend planning rituals for closing. “Both congregations are losing something,” says T. Michael. “Everybody goes through a loss when there is change. People need to acknowledge and grieve.” The Parkway congregation also brought important objects to the Robbinsdale location, such as a baptismal font.