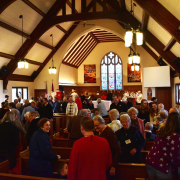 When Rev. Dr. Jill Sanders of First Congregational UCC in Alexandria joined a community group that was pondering whether to resettle a refugee family from Afghanistan, she found 30-40 kindred souls who collectively said “We’re interested.”

The group needed a fiscal host, however, to manage contributions to pay for resettlement, which is $2,275 per family member. Rev. Sanders approached her church leadership and not only did they agree to serve as fiscal, the Council also agreed to give a $,2,275 lead gift!

“I was overwhelmed,” Sanders says. “Our small but mighty congregation really stepped up.”

The group working on resettlement is now raising the rest of the funds to support an entire family as well as searching for appropriate housing. “We have three to five weeks until the family arrives, we think, so we’re sort of building the airplane in flight,” she says.

There are still close to 20,000 Afghan refugees living on U.S. military bases, many of whom were forced to flee the country when the U.S. pulled out last August. The Alexandria group—the “Lakes Area Sponsor Circle”—is affiliated with the U.S. Department of State’s Sponsor Circle Program. The program focuses on creating new opportunities for individuals and community groups to directly support Afghans who have been relocated to the U.S.

Sanders says the Lakes Area Sponsor Circle wants to engage the full community in offering a warm welcome to the family. “Right now we are focused on raising the funds and finding housing, but soon we will be looking for donations of household items,” she says. “And further down the road, we may ask people to help drive the family to the closest mosque so they can worship.”

Sanders is deeply proud of her congregation’s involvement. “We are very mission-minded and outward-focused. That’s what we’re here for – to give ourselves away.”

* * *
Late breaking news! Peace UCC in Duluth also just got approved to resettle Afghan refugees. Rev. Charlotte Frantz said that the church will support four Afghan newcomers through the same U.S. Department of State program. A team of five has been working on this issue since mid-November. Watch for an update on both Peace UCC and First Congregational Alexandria’s progress in an upcoming edition of COMMAntary.