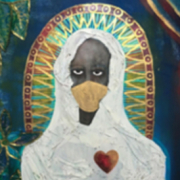 Eighteen voting delegates represented the Minnesota Conference at the UCC’s General Synod July 18–25. Nearly 2,000 people attended this all-virtual event. Read reflections from two of our delegates below, and learn more about actions taken and other highlights of this biennial gathering of United Church of Christ members nationwide. Rev. Anna Larson and Rev. Chris McArdle share their reflections.

How are we called to be the courageous church? Sincerity in love, honoring others in need through joy, patience and faithfulness, hospitality, rejoicing, humility and peace (Romans 12:9-18).

Our first ever online General Synod was like having a UCC wi-fi tv server. While we marveled at the wonders of technology, it was simply the curtain by which real human faces and voices from across the miles, across the aisles of differences were revealed with greater intimacy than in-person. We had the ability to “change channels” and choose where to place our time and attention, but the call to be courageous as church was impressed upon us all through the rainbow of charisms inside and out our porous church body. Sikh activist, wise woman Valarie Kaur shared a depth of wisdom and soul that resonated with the teachings of Jesus and the Holy Spirit’s free-flowing power. Drawing upon her book, See No Stranger, a Memoire and Manifesto of Revolutionary Love, Kaur re-oriented us to our needed capacity to wonder in order to fulfill our Christian mandate, to love others as ourselves. “You are the me I do not yet know” helped ground us in the call to sincerely love (Romans 12:9-18) watering the soil we are collectively rooted in.

When the day of Pentecost had come, they were all together in one place. And suddenly from heaven there came a sound like the rush of a violent wind, and it filled the entire house where they were sitting. Divided tongues, as of fire, appeared among them, and a tongue rested on each of them. All of them were filled with the Holy Spirit and began to speak in other languages, as the Spirit gave them ability.  (Acts 2:1-4, NRSV)

In the story of Pentecost, God’s very breath enters the place where Peter and the faithful have gathered, inviting them into a new relationship with each other and the world.  In many ways, breath was a prevailing theme in the 33rd General Synod of the United Church of Christ, promoted as a “Special Edition Synod” rather than a “Virtual Synod.”  That theme of breath came up time and again, especially in the final worship service on Sunday evening, as many of the liturgical elements touched upon the breath:  our breath, God’s breath, the literal and figurative breathlessness of COVID-19, and the deaths of our siblings who cried out, “I can’t breathe” as the breath left them.  As the first General Synod to be held since George Floyd’s death in Minneapolis on Memorial Day 2020, could we have done aught else?  (The photo, “Our Lady of COVID” by Shannon Kearse-High, adorned the online bulletin for that service.)

From where I was sitting in my home office, the breath of the Spirit was not constrained by the digital medium of Synod. The Holy Spirit, so often characterized by its capacity to surprise us, did it again and again. Many I know confessed surprise at how moving the online worship services were; for though they were prerecorded, it was clear that much money and time had gone into their production. Though we watched them from afar, they still gathered us in. (Showing bloopers during the credits helped!) Those services came in three waves:  soil, water, and air, all grounded in the overarching theme, “Rooted in Love.” Much attention was paid in the Soil and Water services to the natural world, particularly as it pertained to climate change, with a special focus on creation-service as led by Indigenous participants.

My breath caught from time to time over the week. Though I cry easily, I still was surprised when it happened: when Christopher Grundy sang during an Eden Seminary special gathering; when a new song for worship struck me just so; when LBGTQIA+ delegates rose to speak of their personal history with conversion therapy—and as 99% of the delegates voted in favor of a resolution calling for its abolition.

I cannot speak for others, and even less for those who have known marginalization in this world in ways that I have not.  We all breathe in the same breath of God, but our contexts differ greatly. Nonetheless, I am anecdotally aware that I wasn’t alone in feeling surprise at the way our plenary sessions played out. At every General Synod, the delegates consider resolutions that come from Conferences, Associations, or even small groups of local congregations, and there is hardly a Synod that goes by where there aren’t at least a couple of controversial resolutions. Sometimes such resolutions pass, often after working committees or the full Synod amend them. Sometimes such resolutions go down in defeat. Sometimes the resolutions simply get referred to the UCC Board in a parliamentary effort to kick the can down the road a bit, whether because more discernment is needed or because the issue is so painful that the Synod simply cannot see a path through the woods that doesn’t involve people getting hurt.

Two resolutions at GS33 were so fraught. The first was a resolution brought to Synod by the Association of Hawaiian Evangelical Churches (AHEC), a non-geographic Association within the Hawaii Conference. That Association asked the Synod to affirm that the United States of America had been in a perpetual state of occupation of Native Hawaiian land and people since 1893, when President Grover Cleveland had told Congress that the displacement of Queen Lili’uokalani by certain parties (including some from the Congregational Church) had amounted to an act of war. It was clear from the outset that the resolution faced controversy in Hawaii. Several letters from AHEC congregations were published that requested disassociation with the resolution. Native Hawaiians are not of one mind on the matter, and many delegates openly worried that there was no good choice to be made.  At the end of that resolution’s time on the agenda, just over 60% of the voting delegates voted to approve it—but the threshold for passage was 66% (2/3).  Across the nation, delegates exhaled in either disappointment, relief, or maybe even both.

The next day, we took up a resolution, brought to Synod by a cluster of churches, that would once again express support for the Palestinian-Israeli peace process. This time, Palestinian partners in ministry were asking the General Synod to specifically call Israel’s occupation of Palestinian territories apartheid. The resolution’s authors also named it sin. In committee, both of those words were deemed too inflammatory and were subsequently removed from the resolution. Jewish interfaith partners had expressed dismay at the apartheid language. Some within our denomination rejected the language of sin, perhaps out of a shared awareness of how sin theology has been used to shame and control people. The exclusion was no surprise; such things had been stripped out of resolutions regarding Israel/Palestine before. But then one delegate moved to reintroduce the apartheid language, arguing that it was a technical, legal term that was both accurate and applicable, and more importantly, it was what our Palestinian partners were exhorting us to say. Perhaps to the surprise of many, the full body restored “apartheid” by a substantial margin. Then our own Conference Minister, the Rev. Shari Prestemon, moved to restore the sin language. She argued that Scripture did not shy away from naming oppression and persecution as sin, so why should we? After others were given time to speak in favor of that motion or against it, again we were surprised when a strong majority of the body voted to restore the language, thereby undoing much of the working committee’s labor. When it finally came time to vote on the final resolution, we collectively held our breath as we waited for our screens to show the result:  passage.

I suspect that the surprisingly strong passage of the Palestine/Israel resolution impacted some who had voted against the Hawaii resolution. The arguments in the case of the former had been persuasive. Youth delegates had risen to demand that we listen to the voices of the oppressed before all other voices, even if that vexed our interfaith partners. Some delegates voiced concerns at how white supremacy was so often maintained because delegates feared upsetting one group while trying to help another. In private social media groups in which I am a participant, some remembered times when resolutions were so watered down as to be toothless. Some noted how parliamentary procedure had often been used to erode support for resolutions in a way that maintained the status quo. Determination seemed to grow behind the scenes to not let this happen again; so, as the final plenary on Sunday wore on, we saw multiple attempts to bring the Hawaii resolution back to the floor for reconsideration. Every one of those attempts failed—until one didn’t. And so, late in the day, well into the 6pm hour (CST) when we were supposed to already be deep in our closing worship, the body once again considered the Hawaii resolution. The same arguments were made as had been made the day before—some in the exact same language and from the same people. And yet, something this time was different. We listened to our youth delegates. We listened to what few Native Hawaiian delegates were present. We had set ourselves a surprising precedent. We heard and felt the movement of the Spirit differently. And when the final vote came? More than 66% of the delegates voted to adopt the resolution. I did not see spontaneous outbursts of joy like I’ve seen at other Synods, but I did see a gasping, widespread “WOW.”

And we all kept breathing.

The General Synod looks macrocosmic, but it’s really a microcosm of our churches. It is not monolithic. It is home to political conservatives and liberals, theological traditionalists and progressives, and a degree of diversity that is not on display in many of our local congregations. There are fights and celebrations, joy and sorrow, determination and regret.  General Synod 34 in Indianapolis will be home to all these things too, presumably in-person. But I’ll remember GS33 for the breath, the ruach, the pneuma, the surprise, and the flickering light of computer screens that seemed to alight upon the foreheads of the gathered people who were somehow both near and far. For at GS33, in a way I’m still grappling with, it seemed as if each one heard each other speaking in their native languages, and we closed the Special Edition General Synod, amazed and astonished. Thanks be to God, to Jesus the Christ, and to the always-surprising Holy Spirit!