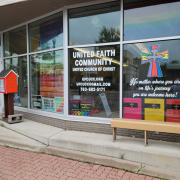 After George Floyd was murdered in May 2020, the congregation of United Faith Community UCC in Buffalo seized the opportunity to speak up for racial equality. “We want to be the progressive voice in our area, which is fairly conservative,” says Rev. Ole Olson, who helped form the church in 2015 and serves as its senior minister.

United Faith Community became a part of the Wright County Coalition Against Racism and was asked to help organize its interfaith outreach sub-committee with members from Buffalo, Monticello, and Maple Lake. “It has been a year of self-education,” Olson says. “We led racial studies, starting with a series of YouTube videos entitled ‘Difficult Conversations with a Black Man.’ That led to many interesting conversations. We discovered that while we knew racism was an issue, it is a much bigger deal than we all thought.”

United subsequently joined with a local Presbyterian church for a book study series on racial topics. That experience led them to wonder how they might share what they had done and learned with others. “We wondered how can we help others start on a journey like we’ve taken over the last ten months?” Olson says. The group is busy curating a list of resources especially pertinent to faith communities. “We’ve read some really books, like Dear Church and So You Want to Talk About Race,” he says. “We think we can be of real help to other faith communities.” United is actively seeking grant funding to host a racial studies library that would be available free of charge to congregations in their community.

United Faith’s journey has also brought unexpected joy, Olson says, in the form of a budding relationship with Ballet Folklorico Rosa a Quetzal. “We were introduced to this grassroots group, most of whom are from Mexico. We have learned so much from them about their traditions and their immigration experience. Our relationships are really growing.”