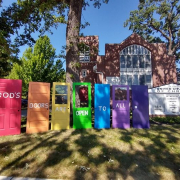 “Can we be Christian and still leave room for other beliefs to be true? I believe we can. Imagine God speaking to us in a variety of languages – knowing just what each of us needs to hear to find our way to Holy Love. This is our framework for encountering world religions; Languages of Love!”
—Rev. Jill Warner

The New Journey Congregation in Hutchinson is spending its summer learning about the faith traditions of others. “Languages of Love” is the title of the church’s worship series, being led by Rev. Jill Warner.

“This series centers on whether we believe our language about God is definitive or descriptive,” says Warner. “I believe God is beyond definition, so all language is descriptive. I imagine God speaking to us in a variety of languages, through a variety of world religions. Christianity just happens to be my spiritual tongue.”

Each week, the New Journey congregation learns about the basic principles of a tradition. Over the course of the summer, they will explore Judaism, Christianity, Islam, Zoroastrianism, Bahá’í, Hinduism, Buddhism, Confucianism, Jainism and Sikhism. “We don’t pretend to be experts,” says Warner. “We understand we are just getting a small glimpse, and that every religion has great diversity.” Weekly, the congregation is encouraged to visit a website of a particular tradition to get a deeper and representative look.

The series has brought new people into what Warner calls “a really cool congregation with open-minded people.” Because the community of Hutchinson does not have a great deal of religious diversity, Warner says this series is especially important. “We don’t just have a mosque or a temple around the corner. It felt like the right thing for us to do. Religion is one of the things that we can start to understand about one another. We’ve had way too much history fighting over God.”