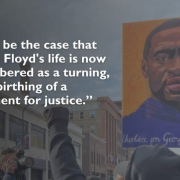 This article was originally written for the UCC’s Justice & Peace Network newsletter.

Our voices seemed to come together by chance. This local church Social Justice Outreach (SoJo) Committee started discussing the need for Minnesota faith-based responses to the murder of George Floyd by police officers.

With the blessing of the congregation, this United Church of Christ in New Brighton (UCCNB) Committee sought to reach out to other faith communities. Two UCC churches responded. The early discussions centered on two approaches. The first was to send a letter to the Minneapolis City Council expressing support for its vote to dismantle the city’s police department and start anew with a citizens controlled Public Safety Commission. We sent the letter to the city council, copying leaders of the state legislature and contacts in local news media.

Secondly, this group of clergy and lay church members said that we needed to consider providing educational
opportunities for learning about police violence. A fellow graduate of my seminary suggested that we ask our alumni association to organize a forum on policing. To me our discussions were taking on the nature of making “Stone Soup.” Everyone agreed with the idea of an educational forum. So, I was not surprised that the educational approach received the support of the entire Board Of our Yale Alumni Association Of the Northwest (YAANW).

We agreed that our Minneapolis area was “Ground Zero” for the nationwide “pandemic” of police violence toward African Americans. Along with our Board’s Immediate Past President Kenneth Freed, I accepted the charge to organize a forum on policing. Ken and I chose the title “When Will it Stop? The Killing of Unarmed African Americans by Law Enforcement.” When we were able to assemble a panel of distinguished experts, the virtual forum was scheduled and held on February 25, 2021.

The link to this event is printed below. Members of the Zoom audience gave overwhelmingly positive responses in the survey and in their Chat comments. They suggested that follow up educational events be held. Our response is that planning follow up events will be helped by our paying close attention to the court trials that have started for the indicted police officers in the killing of George Floyd. Waiting for the first verdict is our next step. Still, my thinking points to the fact that the call for learning and seeking understanding started in a local church meeting.

A recording of the February 25 presentation can be seen here.