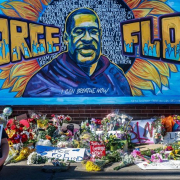 On Tuesday, April 20, deep into our Easter season, a welcome sign of Resurrection hope showed up. Derek Chauvin, a former Minneapolis police officer, was found guilty on all three counts in the death of George Floyd on May 25, 2020.

Across the Twin Cities, and indeed across the nation, there was a palpable sigh of relief and cries of thanksgiving. Finally, an officer who needlessly killed a person of color was held accountable. The jury’s decision simply shined a light on what we already knew: George Floyd’s black life mattered. George Floyd was a precious Child of God whose dignity and worth should never have been in question.

While we rejoice in this one verdict in this one case about this one precious life, we must also remember that far too many other lives have been similarly taken with no accountability that followed. Daunte Wright’s death in Brooklyn Center at the hands of a police officer on April 11 leaves no room for doubt that this centuries-long pattern of violence against persons of color will continue until and unless substantive, transformational change comes. Racism will continue to rear its ugly head until we who have white privilege face hard truths and do the work needed in our own lives and communities to dismantle racism in all its forms.

We know from our own faith’s story that after the Resurrection, the work of the emerging Church began in earnest. It was then that all who claimed Christ as their cornerstone had to enflesh his message and ministry in their own daily lives. It was in that post-Easter season that the Church was commissioned to build beloved community and step into its calling as disciples of Jesus Christ.

We are in that season now, beloved Church. We have still more work to do to create a just and loving world for all. And that work must be done by all of us: in rural places and cities, in small churches and big ones, from north to south and east to west. All of us.

What will you do where you are to share in this ministry to which all of us are called? Let us not grow weary in witnessing to the extravagant love and bold justice of the God who created us and calls us to faithful ministry rooted in Easter Hope.