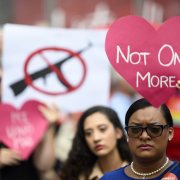 These are the names of just some of the cities where mass gun violence has occurred in our nation. The city of Buffalo here in our own state of Minnesota is another, where a shooter shot five people at a clinic, killing one, just last month.

And now yet two more: Atlanta and Boulder. Within less than one week, these cities have been added to this horrific litany of cities where mass shootings have occurred. Eighteen precious lives were lost in these two events, 18 families devastated, 18 communities traumatized.

The scope of mass gun violence is a uniquely American experience. And it’s getting worse. According to the Gun Violence Archive, the number of mass shootings in the United States has nearly doubled in the last 3 years. (Mass shootings are defined as an incident where at least 4 people are either wounded or killed in roughly the same time and location.) In 2018, there were 337 mass shootings; in 2020, there were 611. And there have already been 103 mass shootings in 2021. It seems no public space is safe space anymore; our houses of worship, schools, movie theaters, night clubs and concerts, clinics, spas, and stores have all been invaded by these insidious, evil acts.

Every time another mass shooting occurs, a nauseous mix of despair, anger, and frustration churns in my gut. I lift to God the same ancient prayer that has been uttered by prophets of old and generations of the faithful in times of despair: “How long, O God, how long?”

The simple and painful answer, as with so much that ails our society, is that such violence and bitter loss will rage on until we say “no more” and collectively summon the political and communal will to demand and create substantive change. Until that time, I suspect God looks upon us with an aching, grieving heart and wonders also: How long, my children? How long until you turn from violence, stop making guns your idols, and embrace lives of love and justice and peace?

O God, we grieve so much in these days. Our stomachs lurch at the shocking loss of life in Atlanta and in Boulder and in all the places where gun violence traumatizes families and communities. You have taught us another way. You have invited us to a pathway of peace. We confess we have not yet embraced your hope and vision for us. Grant us courage to make change. Make our voices bold and our intentions worthy. And turn us from the violence that destroys us to a love that builds us up.