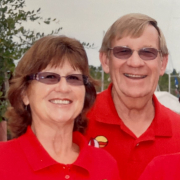 In just a few weeks, Maryjane Westra will head back to Honduras as a mission co-worker with the United Church of Christ’s Global Ministries. It’s a long way from Fergus Falls, where she currently lives, but it’s a country she knows well, having served there with her husband, Don, from 2013-2017. And that was after she and Don served in Zimbabwe from 2009-2013.

Back in 2009, the Westras were eager to see the world. “We had always talked about living in another culture, about seeing the world but not from a tour bus or a cruise ship,” Maryjane says. Their eight children were grown; Don had handed over the reins of his engineering firm to his son and Maryjane had turned her adoption agency over to a trusted colleague. They applied with Global Ministries with the intention of volunteering for a year, she says. “Then Global Ministries said they would pay our expenses if we signed on for three years. It took me about five minutes to say yes!”

In Zimbabwe, Maryjane worked in a hospital, helping co-administer and develop policy. Don threw himself into hands-on projects. “Don was never happier than when he had dirt under his fingernails,” she says. After first three years, as part of the agreement with Global Ministries, the Westras returned to the U.S. to share their experiences. “It’s so fun,” Maryjane says. “You get to travel around UCC Conferences and tell your story. We loved it.”

The Westras were now were hooked. They renewed with Global Ministries and returned to Zimbabwe. In 2013, when their visas expired—and were mysteriously not renewed—they spent a few weeks in Mozambique deciding what to do. They decided to continue their work in Honduras. They loved their time in this Central American country, where Maryjane says they felt “spiritually close to the people.”

In 2017, at the end of their three-year commitment, the Westras returned to their home in Fergus Falls. They were pondering their next move when Don died unexpectedly in 2019. “Don was a partner in all of this,” she says. “I was always the pusher for going abroad, but Don just grew wherever he was planted. He really thrived in international places.”

As Maryjane contemplated life without her partner, she also watched two back-to-back hurricanes devastate Honduras. “That crisis just motivated me,” she says. “I was feeling a little useless and bored. I really feel like there is something left in me to give.”

Earlier this year, she decided to return to Honduras—to the same area and position at the vocational school—once again with Global Ministries. She’s committing to a year at this point. “There’s a big world out there, so I wouldn’t mind going somewhere else,” she says.

The Conference celebrates Maryjane’s commitment to service and sends her out into the world with abundant prayers of support. Maryjane is a new member of First Congregational UCC in Alexandria.