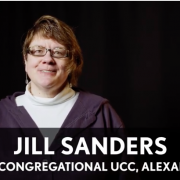 Shortly after the insurrection at the U.S. Capitol, a pastor in Alexandria, Minnesota, posted a Facebook video telling citizens to be ready to “arm up.” He said he expected President Donald Trump to enact martial law and that he was tempted to open his black robe to show his AR-15 rifle while making the video.

The video fueled divisions in an area where political divisions were already profound, said Rev. Dr. Jill Sanders from First Congregational UCC in Alexandria. Area clergy, who were meeting in a weekly lectionary group, immediately began preparing a response to the video. “We knew we wanted to respond, to have a public witness,” Rev. Sanders said. “But when we met, we also realized we needed to pause and reach out to our evangelical brothers and sisters.”

They did exactly that, and on January 18, clergy from a diverse array of churches gathered to talk about how to respond. “We have a history of difficulty in churches getting along in the area,” said Sanders. “So, the fact that we could all be in the same room was an important step.”

The group co-authored a letter to the editor of the local paper, but they also wanted to produce something for social media. “We decided not to speak against what this pastor said but to speak to what we are for,” said Sanders. “We wanted to be clear that we value peace and that we have to figure out a way to talk to each other even when we disagree.”

The result of their unified work is an incredibly powerful video. Watch it here. “I think we agreed that churches haven’t done as much in the past as they might have to address divisions,” said Anders. “It took something shocking to bring us together and for us to say, for all the things that divide us, we are together in pursuing peace and unity.”