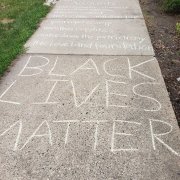 The Minnesota Conference Board recently approved a $25,000 gift to support the Minnesota Council of Church’s (MCC) Truth Telling and Reparations Initiative. The ambitious 10-year initiative, the first of its kind in the nation, is focused on addressing the historic harm done to African American and Native American communities in Minnesota. Its three-pronged approach calls for truth telling about systemic racial injustice, including complicity by faith communities; education to equip denominations and congregations through anti-racism and cultural competency training; and reparations in Black and Indigenous communities.

“The work of racial justice and reparations is enormous in scope and significance,” says Minnesota Conference Minister Rev. Shari Prestemon. “It’s not work the Conference can do alone so it makes good sense to collaborate with other partners. Joining with the Minnesota Council of Churches gives us more scale across the state and puts us at the table with a far more diverse group of people racially, which will root and inform us in very important ways. The MCC is also a long-time and trusted partner of ours, and we know solid relationships are critical to advancing work that is so challenging.”

All 25 denominations in MCC’s coalition are supporting the initiative, according to MCC’s CEO Curtiss DeYoung. He says that once the initiative officially launches, leaders will explore connections with the Roman Catholic Church and broaden the effort to be interfaith.

“We see this gift as an act of reparations on our part and a demonstration of the commitment we made when the Conference passed the Resolution Calling for Justice through Reparations in 2019,” said Prestemon.

MCC is currently accepting applications for co-director of the initiative. See more info.

Two weeks after George Floyd was murdered at 38th Street and Chicago Avenue in Minneapolis, the Executive Committee of the Conference Board of Directors approved the establishment of the Amos Task Force to develop a long-term strategy for the Conference to address and repair historic and present-day racial injustice in Minnesota.

“The Amos Task Force has been helpful in our early decision-making about reparations, identifying new Indigenous partner organizations last year to whom we made gifts,” says Prestemon. “The Task Force will also make recommendations to the Board about longer-term strategies to ensure our commitment to dismantling racism is strong, wise, and authentic.”

In the last few months, the Task Force has directed reparations for Indigenous organizations, advocated for the grant to MCC, hosted a book reading and action planning for authorized ministers, and begun development of an audit and coaching system for individuals and congregations to look deeply at the issues of racial injustice. Associate Conference Minister Anita Bradshaw, who has been staffing the Amos Task Force, said the Conference intends to walk alongside congregations to “make racial justice work real.”

The Task Force is also collaborating with United Theological Seminary to co-host a webinar series this spring entitled “Disrupting White Supremacy: Resources for Racial Justice Work in Communities of Faith.”

Thirteen diverse clergy from across the Conference are serving on the Amos Task Force:

The Minnesota Conference United Church of Christ equips a courageous Church alive with Christ’s transforming love. We combine our voices to further courageous action, justice, and mercy, and we steward God’s gifts, leveraging our resources to accomplish our collective mission in the world.