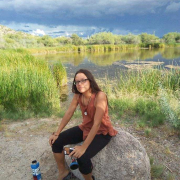 The Minnesota Conference United Church of Christ Immigration Team will host the second discussion in its series on “What is Happening with Immigrants?” December 7 from 7-8:30 pm. Three speakers will talk about what is happening at our southern border: Dora Rodriguez, an advocate and activist for migrant rights; Nellie Jo David, a member of the Hia-Ced O’odham tribe; and Dan Millis, program manager for Sierra Club Borderlands.

This is an important time in our country as President-elect Biden and Vice President-elect Kamala Harris have pledged to reinstate Deferred Action for Childhood Arrivals (DACA) and Temporary Protected Status (TPS), and to work toward comprehensive immigration reform. Join us December 7 to learn more. The event is free and open to all, but you must register to receive the Zoom link.

Dora Rodriguez is an advocate and activist for migrant rights and a survivor of the 1980 tragedy in Ajo, AZ, where 13 El Salvadoreans fleeing civil war in their home country died. This led to Dora becoming one of the first people assistant by the sanctuary movement in Tucson, AZ. Today, she is the director of the non-profit organization Salvavision Rescue Arizona, an organization that provides aid and support to asylum seekers and detainees in Arizona and border towns, as well as aid to those who have been deported. Dora currently resides in Tucson with her husband. She is the mother of five children and three grandchildren.

Nellie Jo David is a member of the Hia-Ced O’odham tribe. She received her undergraduate degree from Arizona State University and her law degree from Michigan State University College of Law where she studied Indigenous Law and Policy. She is currently a completing her doctoral studies at the University of Arizona. An organizer focusing on indigenous human rights and autonomy on the imposed U.S./Mexico borderlands intersecting her own Tohono O’odham Nation, Nellie has witnessed the increased militarization of her border community of Ajo, Arizona. She dedicates her work to migrant justice and protection of the rights of Indigenous peoples, the land and the wildlife. Her 2017 experience in occupied Palestine reinforced for her how walls and checkpoints oppress and destroy human lives.

Dan Millis is the program manager for Sierra Club Borderlands. Born and raised in Arizona, he has worked on border issues since 2005 and has been a part of numerous Conference border trips. From his 15 years of experience working in the borderlands area, he is knowledgeable about the effects of construction of a border wall on the land, water, wildlife and O’odham Nation. He has been involved with the Sierra Club’s legal battles related to this area and will share the current status of those court cases.