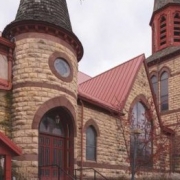 Five southeastern Minnesota churches, including the First Congregational Church of Winona, UCC, have joined forces to clear more than $2 million of medical debt throughout Minnesota and Wisconsin.

The five faith communities raised $15,000 and, through a partnership with the New York-based nonprofit RIP Medical Debt, purchased and cleared medical debt in bulk across both states. As a result, 1,057 households will receive a letter informing them that their medical debt has been relieved and that credit agencies have been informed these families are no longer liable for the debt.

“Our primary goal with this campaign was to relieve the burden of debt for families across the region,” said First Congregational Church’s Rev. Danielle Bartz. “We also wanted to show our churches that even small communities can do tremendous things. This campaign has more than proven that.”

The congregations raised the $15,000 in spring and early summer, achieving their goal by mid-July. They then engaged RIP Medical Debt for its expertise in finding and purchasing medical debt that was causing tremendous burden for families in Minnesota and Wisconsin. By seeking debt that had been deemed of low value to debt collectors, and then purchasing it in bulk, much of the debt was able to be purchased for less than a penny on the dollar. That mean, small donations created a huge difference in the lives of many people.

The idea to raise money to relieve medical debt grew out of weekly meetings between the clergy of the five churches. The five pastors shared a recorded video with their respective communities, informing the congregations of the impact of their $15,000. “We are so thankful for the overwhelming generosity of our churches,” said Rev. Jeff Franko from Cedar Valley Lutheran Church. “Clergy may have a lot of ideas, but it is our congregations that make them real. They gave from their abundance, knowing that they will likely never know whose life they were changing.”

RIP Medical Debt is a nonprofit organization that allows generous donors and organizations to erase the debt of Americans whose lives have been destroyed by unjust medical debt. Founded in 2014 by two former collections industry executive, Craig Antico and Jerry Ashton, RIP rose to national prominence on an episode of Last Week Tonight with John Oliver that has been viewed almost 10 million times, where RIP facilitated the erasure of $15 million in medical debt for only $60,000. To learn more and get involved, visit www.ripmedicaldebt.org.