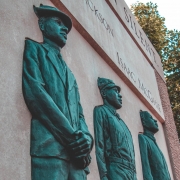 Nearly 80 years after three young black men were lynched on the streets of Duluth for a crime they did not commit, a small but mighty group of people came together, determined to infuse the 1920 deaths into consciousness of the community. One of those people was Henry Banks, the Conference’s guest speaker for the September 15 “Justice Talk to Justice Walk” discussion.

Banks told a powerful story about the importance of community reconciliation in the wake of an unspeakable incident. While Banks said it took many years to “bring the truth to light,” and especially to get white people to acknowledge the atrocity, his group stayed the course; in 2003, the Clayton Jackson McGhie Memorial opened in Duluth and was subsequently recognized by National Geographic as one of the top memorials in the U.S. More than 1,500 people and congregations from across the country (including Pilgrim Congregational UCC and Peace UCC in Duluth) contributed to the project, the country’s first memorial to address lynching.

Banks emphasized how important it is for people to both understand that these lynchings happened in Minnesota and to connect today’s lack of economic opportunity for people of color to the same thread of racism. “Racism is our biggest pandemic,” he said, “Healing, understanding, compassion and love are the answer.”

Banks acknowledged the difficulties facing our communities but told attendees, “The goodness of Jesus Christ is our answer. His mandate was to love each other.”

With this latest webinar (watch below) and the upcoming one on October 1 with Jim Bear Jacobs, the Conference is “looking in our own Minnesota mirror to confront our racist history as a state,” says Conference Minister Rev. Shari Prestemon. “We are reminding ourselves that George Floyd was another horrific incident in an historic line-up of events that reflect white supremacy in our state. We need to come to terms with our own history.”