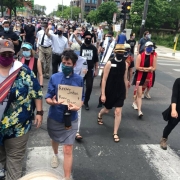 “Those who are in the most pain must be in the center of our work.” 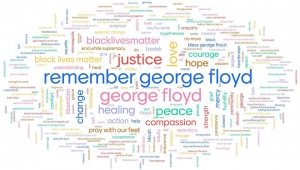 That is what Rev. Traci Blackmon told nearly 20,000 people from across the country who viewed the virtual interfaith vigil for George Floyd, co-planned and hosted by clergy in the MN Conference.

Blackmon, Associate General Minister of Justice & Local Church Ministries for the United Church of Christ and senior pastor of Christ the King United Church of Christ in Florissant, MO, was joined by Conference Minister Shari Prestemon and other pastors, rabbis, imams, and musicians in the one-hour vigil and call to action on Friday, May 29, organized to grieve the terrible murder of George Floyd at the hands of four Minneapolis police officers.

Rev. DeWayne Davis from All God’s Children Metropolitan Community Church shared these powerful words about the death of George Floyd and the turmoil that has followed: “This is a reminder of the devastating price we pay for our inhumanity, the price we pay for our satisfaction with business as usual, the price we pay for our failure to do justice. Generational racism, trauma, indifference, poverty and state-sanctioned violence require intentional, collective and persistent action to undo the damage. We have work to do.”

View the vigil and call to action.

Marching In Support of Our Black Clergy 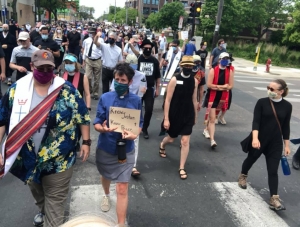 On a steamy Tuesday afternoon in June, hundreds of clergy followed black clergy in a silent marches to the State Capitol and to 38th & Chicago, the site of where George Floyd was brutally murdered by Minneapolis police officers.

Clergy stretched as far as the eye could see—wearing collars and stoles and masks—sending a powerful message of support to our black clergy and wider community. The crowds were encouraged to take a knee and recite the Lord’s Prayer in unison.

Stacey L. Smith, pastor and presiding elder of St. James African Methodist Episcopal Church, said: “We know we are all hurting, and we all want justice. And that’s what today is about. We pray that it is healing that will begin today. We’re going to decree and declare today.”

To see more photos from the march, visit the MN Conference’s Facebook page.