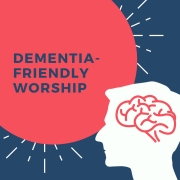 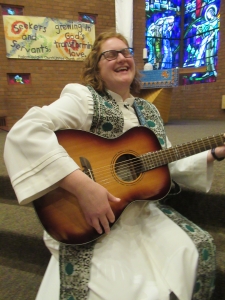 When Claire Klein was working as a music therapist in a memory care facility, she noticed that people living with dementia—even those in advanced stages—experienced clarity and special connection during chapel services and daily devotions.

In seminary, she began to ponder how churches might serve people with dementia who were in earlier stages of the disease and not living in a congregate care setting.

This past spring, after her first ordinational interview, she planned to pilot a dementia-friendly worship service, starting at Hazel Park UCC. The COVID-19 situation interrupted her in-person plans but she has been busy creating online video resources, including hymn sing-a-long videos, guided relaxation exercises, and weekly scripture discussion prompts. The resources are available on Facebook and YouTube.

When this crisis passes, Klein plans to return to her pilot plans. Services will be shorter, with many familiar and traditional hymns. “We’ll offer lots of music because of the connections it makes in the brain,” Klein says. “We plan on an environment of joy and comfort where all responses will be welcomed and celebrated. We’ll read stories about people like Abraham and Sarah who were called to raise a child when they were in their 90s. We’ll ask ‘What are the things you have felt too old to do? What has surprised you in your older years?’ We want to invite everyone to share their gifts.”