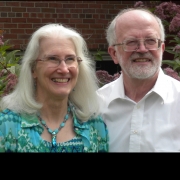 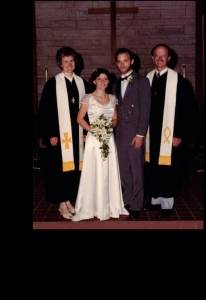 Fifty years ago, Rev. David McMahill and Rev. Jane Adkisson McMahill embarked upon remarkable careers in ministry. Over the years, they have served in many positions—together and separately—in numerous United Church of Christ churches and settings.

David and Jane met at YMCA Camp Sheldon in Columbus, Nebraska in 1965. She was the camp nurse (B.S.N. from the University of Nebraska) and he was the program director. “I’d had a bad experience with nurses so I wasn’t so interested,” he says. “But then I saw her playing a game of ‘Capture the Flag’ and I thought, ‘Wow, she has the most amazing stride!’” For her part, Jane said it only took them three days to figure it out!

They were married in 1966 after Jane completed a year at Drake Divinity School in Des Moines. She joined Dave in New Hampshire where David finished his bachelor’s degree at Dartmouth College. After graduation, they moved to Chicago to earn their M.Div. from Chicago Theological Seminary.

David was raised a Presbyterian and had felt the call to ministry at an early age. “During my teen years, I did not hide my doubts and questions of faith, and was regularly reprimanded for expressing them,” he says. He went off to Dartmouth in 1963, intending to pursue pre-med studies and forget about ministry. “That was derailed by a disastrous chemistry class,” he says. “However, I found that Dartmouth’s outstanding undergraduate religion department met my needs very well.”

Jane had been raised in the Disciples of Christ but with no Presbyterian or Disciple congregation in New Hampshire, they found a place in the UCC. “The UCC turned out to be the best fit for us, not just for that year, but from that time forward,” she says.

During their final semester in seminary, David accepted a call in Ohio. Unsure of what Jane was going to do, and now with a one-year-old child, they discussed their plans at a marriage and family counseling retreat. “It was one of those truth-telling classes of the late 1960s,” Jane says. “We talked about our concerns and the group said ‘Well, why don’t you share the job at the church?’ Well, we thought that was ridiculous and that the weekend had been a waste.”

And then the Cambodian invasion and Kent State shootings happened near the church where David was going to serve. Early on, Jane had thought she would serve as a missionary nurse, but she says the tragic events of 1970 “changed my life direction from using my pastoral care skills in nursing to using my medical knowledge in ministry.” At the same time, David realized the church he was supposed to serve was reluctant to discuss what was happening related to Vietnam. A month before graduation, with not much in the bank (but blessedly, no student loans), David and Jane decided Ohio was not the place they were meant to go.

Back in Nebraska, their home state, United Congregational UCC in Grand Island was seeking a pastor. They decided to propose sharing the position. “They were desperate, and we were so green,” Jane says. “But we grew together and went through so much with that congregation. It was a wonderful experience.” They served for nearly a decade as co-pastors before moving to serve as co-pastors at Northeast Community UCC in Lincoln, Nebraska, from 1979-1990, where they worked with members of this congregation to establish a Samaritan Counseling Center and tutorial program for high-risk youth. In 1990, they accepted a call to First UCC in Northfield, MN, where they served from 1990-1995.

After 25 years as co-pastors, in 1995 the duo took separate positions. “I felt a strong call to serve the wider UCC and did so when I was called as Minister for the Eastern Association of the Minnesota Conference,” David says. Jane went to Falcon Heights UCC where she served as Minister of Faith Education from 1996-2000. Her final position before retiring was senior pastor at Parkview UCC, White Bear Lake, from 2000-2006.

As she looks back on her years in ministry, Jane is amazed at the changes for women in the church. “I was one of only 200 ordained women in the UCC in 1970. While my UCC clergy colleagues were supportive, I was largely ignored by, discounted by, and invisible to clergy of other denominations for the first 10-15 years of ministry. I believe one of the broadest impacts of my ministry was introducing most of the churches of the Nebraska Conference UCC to the idea of women in ministry.” Over the years, Jane has served on the General Synod Nominating Committee and chaired the Board of Directors of the Board for World Ministries (now Wider Church Ministries).

For his part, David served the Minnesota Conference UCC for 11 years, including two as Acting Conference Minister before health concerns forced him to take long-term disability in 2005 (but not before he branded the Conference’s newsletter as “COMMAntary”!). He continued to teach at United Theological Seminary and wrote Completing the Circle: Reviewing Ministries in Congregations, published by the Alban Institute.

Now retired, the duo continues to be involved with and to serve their communities. David sings with One Voice Mixed Chorus, Minnesota’s only and the nation’s largest LGBTQA mixed chorus. “Over and over I have been deeply moved at the power of music to heal, to overcome barriers and build bridges,” he says.

At home, they have transformed their grass into garden, growing flowers and vegetables for their neighbors. They are members of New Brighton UCC, singing in the choir, serving on social justice, outreach and open and affirming teams. They also are deeply proud of their three children and grandchildren. “There isn’t space here to describe all they are up to,” David says.

Looking back over the 50 years since they were ordained, Jane says, “One of the greatest gifts to me of ministry has been being invited to walk with people in the most sacred moments of their lives—birth, marriage, illness, death, struggles with faith and decisions.”

For David, he is most proud of the 25 years he and Jane worked as co-pastors. “Doing so was our counter-cultural statement about gender roles at home and in ministry. The changes we lived were coming, to be sure, but we moved those changes along, paving the way for others who followed.”

The Minnesota Conference UCC extends its heartfelt thanks to David and Jane for their many faithful years of service. Blessings to them on this 50th anniversary of their ordination on October 18.