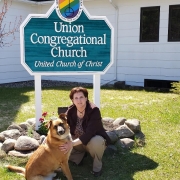 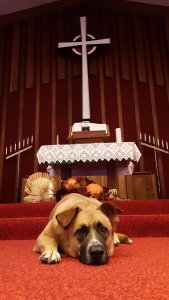 When Union Congregational UCC in Hackensack invited Rev. Torri Vande Zande to interview for its open clergy position back in fall 2018, the committee had a pressing question: “Will your dog Caesar be joining you?”

Pastor Torri was taken aback at first. How did they know about Caesar? “I realized they had looked me up on Facebook and saw how important he is to me,” she says. “They told me ‘We’re dog lovers, too, and you can tell a lot about a person by the way they treat their dog.’”

She didn’t bring Caesar to the first interview, but shortly after, when the congregation voted to call her, he made his first appearance and was “extravagantly welcomed,” she says. Today, Caesar, a six-year-old, German Shepherd mix whom she adopted from a shelter in Iowa, is wholly ensconced at Union Congregational. In fact, he was given a certificate of installation at the same time the Minnesota Conference installed her!

“Caesar comes with me for office hours,” Pastor Torri says. “He’s in every meeting that has food. He is that dog fix for older people who can’t adopt a pet at this stage in their lives and he’s learned to play hide and seek with the children in our drop-off program.” (editor’s note: This was shared prior to the shelter at home restrictions).

Perhaps most prominently, Caesar writes a column, appropriately titled “Caesar’s Tales.” “I was on vacation and, honestly, late with my newsletter article,” she remembers. “I didn’t want to write; I mean, I was on vacation! So, I looked down at Caesar and asked him if he would do it. Of course, he agreed.” That first column was a big hit and led to demand for more. The congregation even held a contest to name the column.

“Caesar can get away with things that I can’t, and he can create a bridge for people,” Pastor Torri says. “When he wrote about me having to put my cat to sleep from his perspective, he helped people understand that even though she was his ‘frenemy,’ he missed her and now he was trying to find a new normal. When he wondered ‘How do I act now?’ the congregation could relate.”

Torri grew up on a farm in Wisconsin but never had a pet indoors. As an adult, she took a break in her studies and became a dog walker. “I just fell in love and I really started to want a dog of my own.” She found Caesar on Petfinder. The woman who had rescued him was very protective and questioned her long and hard, she says. “She knew I was working toward being a pastor and was a dog walker. She had come to faith just a few years before and she said, ‘I don’t pray for dogs, but I pray for this one.’ She brought him to me, and I instantly knew I wanted to keep him. He was so calm.”

Like Caesar, Pastor Torri has found the Hackensack congregation a great fit for her. “It’s delightful here. The leadership team at the church has really embraced me. We both really love it.”

This month, Caesar wrote about “Rabbit Season,” which he says his human (aka Pastor Torri) calls “Easter.” He wonders why they don’t go into the church much these days— and if Rabbit Season, too, is cancelled? He listens as his human reminds him, “Church does not stop. It adapts. Church is not a building.” And then Caesar comes to this brilliant conclusion: “I mean, a group of dogs is called a ‘pack,’ so why can’t a group of humans be called a “Church”? This is fantastic!”