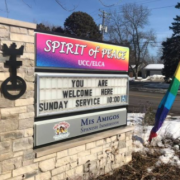 On March 1, a remarkable thing happened in the lives of congregations of Mizpah United Church of Christ and St. Paul’s Evangelical Lutheran Church. After months of discernment, conversation and planning, the two celebrated and commissioned their new name—Spirit of Peace, a UCC/ELCA congregation—the latest step in a process to form one congregation.

“We had profoundly spiritual discussions and soul searching about what it means to be a member of a church that’s affiliated with different denominations,” says Vince Jacobson, who is the new chair of Spirit of Peace’s council. “Some of the epiphanies were breathtaking.”

While work remains to be done in terms of forming what church leaders are calling a “multi-denominational constitution,” the church has begun to create a set of shared beliefs.

“We agreed to let go of creeds in favor of more open-ended faith and honest searching,” says Rev. Zoe Kuester, who serves as senior pastor at Spirit of Peace. “What does it mean to be a member of a church if we honor each person’s journey and learning? ‘This We Believe’ describes us and where we are.”

Mizpah and St. Paul’s came to this moment from a situation common to many churches: declining membership and increasing difficulty affording the operating and maintenance costs of a building. St. Paul’s sold its building and began meeting in a temporary space. “We went through a big discernment process,” says Jacobson. “We asked ourselves what does it mean to be church? What would the world lose if we weren’t around?”

Lent in 2018 rolled around in the midst of these discussions. Rev. Lee Hallstrom, then the pastor at St. Paul’s, contacted Kuester about joining Mizpah’s Lenten services. “We really hit it off,” Kuester says. “I remember saying, ‘I wish we could have worked it out that you could have used our building.’ And Lee said, ‘Wait, is that an option?’ Maybe we should think about it.”

The two congregations agreed to meet and were surprised that more than 25 people showed up to the first discussion. “There was incredible energy and spirit in the room,” Kuester says. “Everyone was so charged, so we decided to keep talking.”

St. Paul’s considered joining with several other ELCA churches along the way, but Jacobson said they realized they would lose their own identity or didn’t have much in common. On the other hand, they had a lot in common with Mizpah.

In summer 2018, the two congregations decided to worship together every week. It went so well, the leaders began to ask what it would look like to put the two churches together. “We didn’t want to call it a merger because we didn’t want either to lose its identity and we wanted to maintain affiliation with both denominations,” says Kuester. The congregations knew, importantly, that they shared values on many key topics, such as social justice and welcome of GLBTQ clergy and members.

They looked across the country for churches that had done something similar and found just one example in Pennsylvania. “We figured out quickly that we had to blaze our own trail,” says Jacobson. They decided to create a document that would organize the two congregations and provide a roadmap until the time they could create a constitution. That shared ministry agreement included guidance in how they would handle finances, the governing board and worship. “We divided up the chores and got it done in six months,” Jacobson says. But as they began to choose a new name, Kuester says that is when they realized they needed to slow down. “We needed time to grieve the loss of our name and figure out a process that worked for all. I learned a lot. They do not teach you these things in seminary!”

In the end, the process worked and 81% voted for “Spirit of Peace, a UCC/ELCA congregation.” On March 1, Craig Pederson, Assistant to the Bishop for Congregational Vitality for the Minneapolis Area Synod, ELCA, joined with Rev. Shari Prestemon, Conference Minister for the Minnesota Conference UCC, to celebrate the new venture with a liturgy of naming. “Theirs is a wonderful story of how we deepen connections by seeking new partners for ministry,” says Prestemon.

Spirit of Peace knows its journey is just beginning, but there are great signs of hope: Kuester says new members are finding their way to the church and weekly worship attendance is growing. To learn more, visit https://www.spiritofpeacehopkins.org/.